5 Tips from Winston Churchill to Overcome Any Storm

Are you having a bad day … maybe a bad week … even a few bad weeks in a row?

C ould you handle it if you had to slog your way through a seemingly unending storm? 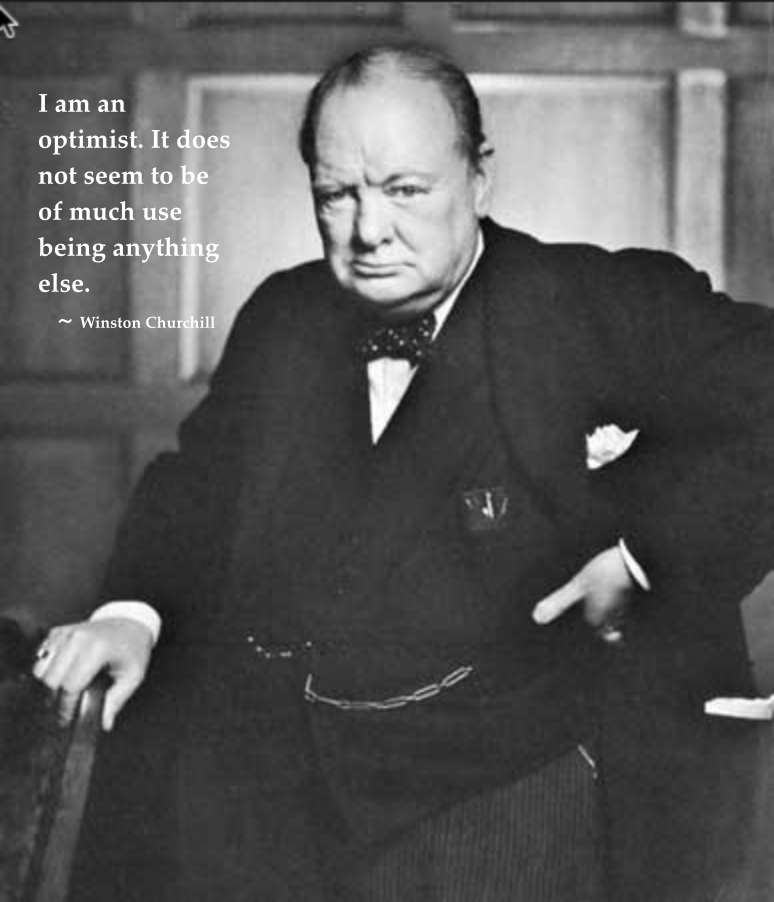 How Do You Achieve Victory Against Insurmountable Odds?

Yesterday, November 30, Winston Churchill would have been 143 years old. He died in 1965 but few modern historical figures are as legendary as Churchill.

It made me think on his countless pearls of wisdom I’ve enjoyed over the years. Some poignant, some funny, some rather cutting. I’ve sprinkled a few throughout for your enjoyment and amusement.

It also reminded me that in the face of life’s challenges, we CAN keep on getting on … and overcome them even when they seem stretched endlessly in front of us.

What Does the Future Hold?

[pullquote]The truth is incontrovertible. Panic may resent it. Ignorance may deride it. Malice may destroy it … but there it is. ~ Winston Churchill[/pullquote]

The future is never clear enough and there are always unbidden passengers getting on the train … economic turmoil, political stalemate, terrorism, the wrath of Mother Nature … it’s a pretty long list.

“Let us go into the storm … and through the storm,” said Winston Churchill as he prepared England to confront the Nazi regime in World War II.

I thought this might be a touch of hyperbole as we face life’s challenges, but then I recalled that Churchill’s odyssey raged for five years, not just a day or a week.

Imagine Churchill, FDR and others slogging for five dreadful years through the greatest threat to civilization we have known.

How do we carry on the fight over a longer period?

So, how do we keep going through thick and thin … beating down the Resistance at every turn … every day … every week and month and year?

Here are a few concepts inspired by the triumph and tragedy of the Churchill years.

This is the touchstone.

The world is ever-changing, and the engine of growth is more like a locomotive than a caravan.

Just as Churchill admonished the naysayers that the reality of war was inevitable, so do we need to accept the new reality and embrace constant change as the only constant in our lives.

[pullquote]”I could not live without Champagne. In victory I deserve it. In defeat I need it.” ~ Winston Churchill[/pullquote]

Churchill is seen visiting with FDR in the White House (in the HBO movie, “Into the Storm”), the first time they had met in almost 20 years.

FDR was recounting the wisdom he had gained during a lifelong relationship with his schoolmaster, Mr. Peabody, recalling his words:

“To believe is to be strong … Doubt cramps energy … Belief is power.”

If we don’t believe in our mission … if we’re not convinced we’re right in the course we’ve chosen … the doubts that creep in will take us off our game, misdirect our fire and leave us stumbling down a circuitous path to nowhere.

[pullquote]It is no use saying, ‘We are doing our best.’ You have got to succeed in doing what is necessary. ~ Winston Churchill[/pullquote]

We must resolve to continue the struggle, to be unwavering in our dedication to overcoming obstacles and to pursue every alternative to achieve success.

We cannot allow ourselves to be complacent or to imagine we will wake up to a new world order.

KBO became Churchill’s favorite phrase that ended most of his conversations:

“Keep Buggering On,” he told everyone.

So, let’s have our five-minute pity party … and then get on with it.

[pullquote]We contend that for a nation to try to tax itself into prosperity is like a man standing in a bucket and trying to lift himself up by the handle. ~ Winston Churchill[/pullquote]

In the context of World War II, there’s no better metaphor for the value of planning than General Eisenhower’s observation as he prepared for D-Day:

“Plans are useless, but planning is indispensable.”

In those first three words, I know he captured the sentiment of many of you, but there is unquestioned value in the process.

D-Day itself is a great example. As soldiers hit the beaches of Normandy, carefully laid plans dissolved in a fog of war, and thousands were suddenly gone.

Yet, the careful planning for Operation Overlord provided a strategy to drive leadership decisions, encourage course corrections and sustain focus on the ultimate goal.

[pullquote]There is nothing more exhilarating than to be shot at without result. ~ Winston Churchill[/pullquote]

Churchill, among his prodigious talents, is heralded as an accomplished orator.

He always felt he spoke to the working man far more than to the lords of the manor, and he didn’t hesitate to share his message in any way possible.

He knew his countrymen needed to hear his reassuring voice, be assured of his passion and commitment even if the news was not good or much different from before.

It’s not possible to over-communicate

Likewise, we can’t over-communicate to our colleagues or employees.

They need the constant reassurance that we are thinking about them, that we are mindful of changes in the marketplace and that we’re constantly striving for new ideas to meet the challenges that are unfolding every day.

Don’t assume they understand just because you already told them.

Tell them again, and again, and keep telling them so they’re engaged in the process and understand the shared goals being pursued.

When times are tough, Churchill’s most memorable words uttered in late, 1941 when visiting his schoolboy alma mater, remain inspirational: