9 Super Annoying Habits I Hope You Don’t Have!

Since summer’s coming to a close … despite the sweltering and unseasonable temperatures around here … why not have a little fun at someone else’s expense. I just hope it isn’t you.

T here are at least 9 Annoying Habits that are the most grating to me … and I’m convinced they represent latent and nefarious character flaws that will be even more annoying when they become visible. 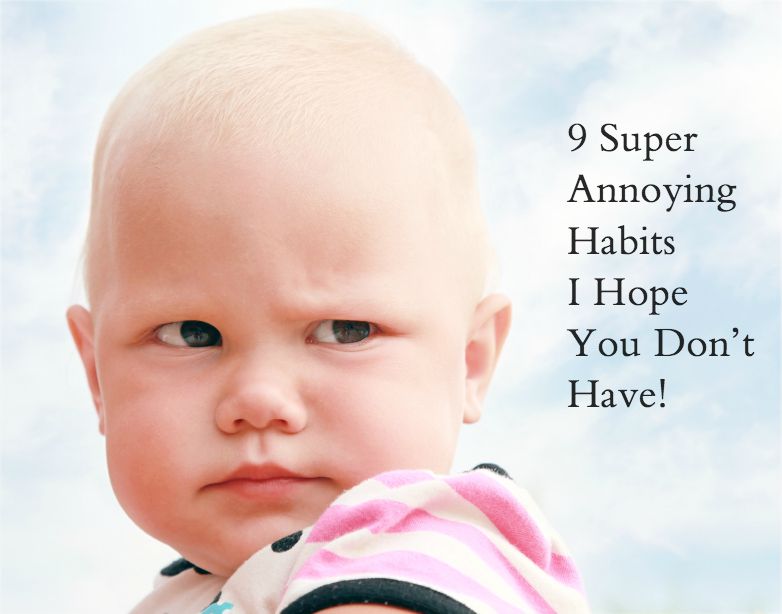 Are there habits in others … not ourselves, of course … that you find particularly annoying?

There are probably a lot of simple ones … squeezing the toothpaste in the middle of the tube, leaving dirty clothes on the floor, not hanging up your towel … minor stuff in the scope of things.

Then, there are those … the ones that are the most grating to me … that I’m convinced represent latent and nefarious character flaws that will be even more annoying when they become visible … and I promise you, they inevitably will.

Some of you won’t like this list … because you’re on it … and yes, I probably will unfairly judge you if I witness this habit. Maybe these are just personal idiosyncrasies …. for you, maybe … but for me … mostly … not.

So, I apologize in advance … but this is just the way I see it using my infallible superpowers. I’m even going to tell you what I suspect lurks beneath the surface of these imperfections.

No, that word’s not strong enough. Oh well, you can judge for yourself, but let me know because I really want to know if I’m the only one who sees these.

But, I have to say this sure is fun

For those of you who will be offended, I really wish these observations hadn’t even entered my mind … and I wish I could get rid of them … but like many of our deep-seated intuitions, they just can’t be dismissed.

You probably won’t notice that I notice … because I’m pretty good at flexing my behavior … but if you look closely, you might see small particles of gray matter start to pulsate behind my corneas .

1. Talking with your eyes closed

There is something about this that is not only annoying but indicative of a self-possessed ego. Invariably, it’s someone who believes their deliberative thought process is so consuming and profound that they don’t really need to look at the person with whom they’re talking … or in their case, TO whom they’re talking.

You might get a small pass because this habit may be more subconscious than those described below, but not much because you can recognize and correct it.

2. Tying a long-sleeve sweater around your neck

This particular habit is much more irritating because it’s invariably a deliberate one. It’s as if this blatant display of savoir faire distinguishes the wearer from the rest of the human race in some meaningful way.

3. Wearing an overcoat with empty arms

This is the more privileged kissing cousin of the previous annoyance, so if you have both of these habits, well, change them, will ya?

When you see someone walking around with their overcoat over their shoulders but their arms aren’t in the sleeves, beware. This ostentatious habit might be the most lethal of all, as it is a disquieting custom that belies a self-centered personality that will eventually upset the apple cart.

BTW, one of the problems with these behaviors is our tendency to ignore them as if they’re of no consequence.

Even though I am vividly aware of this particular one, I truly believe that a doomed acquisition in which I was involved many years ago could have … would have … been averted if this observation had led us NOT to make the deal with that guy in the first place.

It’s a longer story, but the character flaws fused to this behavior doomed the deal from the beginning.

4. Turning up your polo collar when it’s hot outside

The jury may be out on this one, but unless it’s cold outside and you’re trying to keep the wind from frosting your chest hairs, the collar is made to lay down not stand up.

Although this annoying affectation seems designed to perpetuate a prep school aura of superiority, I can report that I have been unable to confirm any scientific foundation for this belief.

[pullquote]Crankiness is at the essence of all comedy. My wife and I were discussing the different types of cranky. There’s entertaining cranky, annoying cranky, angry cranky. ~ Jerry Seinfeld[/pullquote]

5. Carrying reading material to the loo

I really hate bringing this up for the very reason it bugs me.

TMI! I don’t want to know what you’re doing when you go down the hall. I don’t want you to announce that you’ll be sitting instead of standing (or for you ladies, sitting longer) when I see you head down the hall with the newspaper tucked under your arm.

Read at home. Read at your desk. Stuff it in your pants …which you’re going to pull down anyway … but don’t announce your personal business to the world.

6. Chewing on your glasses

Scott Pelley of CBS is an avid practitioner of this annoying practice.I don’t think he can talk without them. (Maybe that’s why he’s such a s-l-o-w-t-a-l-k-e-r?) It seems to be particularly practiced by those who use reading glasses they only occasionally need. I think it supposed to make you seem scholarly and deeply interested, but it’s a ruse that is so affected, it’s barf-worthy.

How about this, Scott? Wear them or put them away. If you need glasses, get some. If you need a pointer, get one. If you’re feeling insecure, get a blanket or a pacifier.

7. Holding a pen while you’re talking but not writing

… and not taking notes.

Sorry, Scott, this is another one of the affectations you seem to share with other news anchors and interviewers. If I saw you take one simple note, I would shut up.

But it’s a prop used to pretend like you’re taking notes … that you’re genuinely interested in what’s being said … but you never use the pen at all.

Maybe it’s just in case you need to take a note? Then take one! Or get that pointer!

Okay, I admit I’m just having fun with this one. But, it did occur on Seinfeld (The Chinese Woman, S6/E4) when George’s Dad, Frank Costanza, was walking down the street with his lawyer, who was wearing a cape. When Jerry told George about it, George responded:

Later, when George asked his father about it …

Feel free to use that line if you’re wearing this totally incredible outfit, but unless you’re Superman, well, you know, you ain’t gettin’ a pass … and like Jerry & Elaine, I’m crossing to the other side of the street.

We’re working hard to provide practical strategies, tools and tips to help you become a More Effective Leader. Don’t miss another blog post by signing up now. When you do, I’ll send you my FREE mini-course, 5 Tools I Can’t Live Without, that will really up your productivity game. Why not check it out?

I know this is the one that will really frost you classicists who have constructed an entire backstory around this custom, so in recompense, I will exempt professors, waiters and clowns from this generalization. I’m also exempting Winston Churchill for so many reasons … and Charles Osgood of CBS Sunday Morning, who wears it so well. Charlie, I’l l see you on the radio.

While it’s de rigueur for black tie affairs, I have rarely found an occasion – sans the exceptions noted above – when it doesn’t denote a studied insouciance that ranks right up there with the armless sweaters and overcoats. Sorry.

Fair or not Fair, that is the question

Gosh this was fun. I’ve been nurturing these hypotheses for years and finally got them into the sunshine. Talk about walking the walk on transparency, huh?

Let the games begin! I can take it.

Question: Super Annoying Habits have I missed? This is a good time to vent … let it all out. You can easily add your comment below, or by visiting our Facebook Page or @Exkalibur on Twitter. I visit them every day and look forward to discussing these ideas and concepts with you.